The majestic baobab tree is Africa’s oldest and most beautiful tree with a truly unique and fascinating history dating back thousands of years.

Where Does It Grow?

As a native to African countries where the climate is extremely dry and arid, the baobab tree’s natural habitat is typically hot and grows on dry stony woodland with well-drained soil in areas that receive low rainfall. During the rainy season, the baobab tree will store and absorb up to 120,000 litres of water in its vast trunk. This enables it to produce a nutrient-dense fruit in the dry season and why it is also known as the ‘Tree of Life’.

The baobab tree is red listed by the International Union for Conservation of Nature due to habitat destruction through extensive agriculture.

Along with being nicknamed ‘The Tree of Life’, the baobab tree has also inherited other names over time including boab, boaboa, tabaldi, bottle tree, upside-down tree, and monkey bread tree.

0
Baobab trees can live for over 3,000 years.
0
Baobab is the only fruit in the world that dries naturally on its branch
0
The baobabs tree can store water in the trunk of up to 120,00 litres to endure harsh drought conditions
0
Baobab trees have six different names, the most common is the upside down tree because their branches look like roots 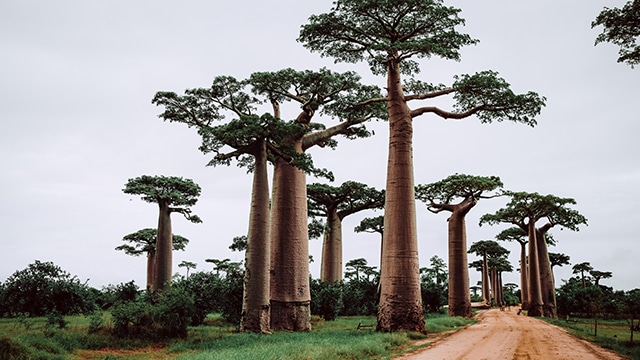 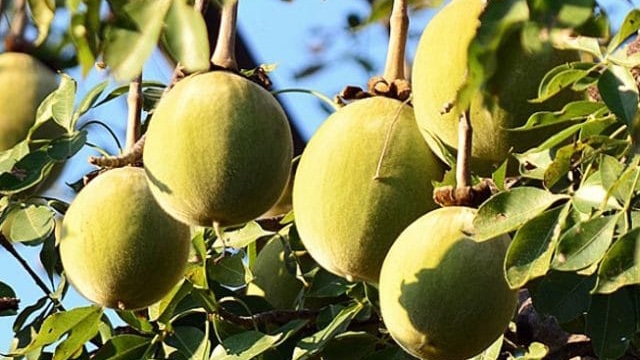 A typical baobab tree can reach heights of 5-30m (16-98ft) and have a trunk diameter of 7-11m (23-36ft). Like most trees, the baobab tree will produce faint growth rings on an annual basis to signal it’s age. However, they are not the most reliable for aging specimens because the rings can become difficult to count and made away as the wood ages.

The Glencoe Baobab, also known as the African Baobab tree or the dead-rat-tree or monkey-bread-tree is considered to be both the oldest and largest living individual baobab tree in existence. It has a maximum circumference of 47m (154 ft) and a diameter of about 15.9m (52ft).

Historically, The Pnake Baobab tree in Zimbabwe was believed to be 2,450 years old when it died in 2011, making it the oldest angiosperm ever documented. After this, the next two oldest baobab trees are the Glencoe Baobab Tree in South Africa and the Dorslandboom in Namibia who are both estimated to be approximately 2,000 years old.

From the fruit right down to the bark, every part of the baobab tree is valuable.

Fruit – Baobab fruit is one of the most nutrient-dense foods in the world. It is the only fruit in the world that dries naturally on its branch. Instead of dropping and spoiling, baobab fruit will stay on the branch and will bake in the sun for approximately 6 months. To read about it’s various nutrients please read The Baobab Fruit

Leaves – The leaves are an excellent source of protein, minerals and vitamins A and C. They are also milled and sieved to make baobab power which are used as health and beauty supplements.

Bark – The bark can be turned into rope and clothing and can also be used for fuel and timber.

According native legends, certain tribes will wash newborn babies in water soaked in the bark of a baobab tree. They believe that like the tree, their children will grow up mighty and strong.

Other folk stories believe that if you pick a flower from a baobab tree, then you will be eaten by a lion. However, if you drink water which contains baobab seeds, you will be safe from a crocodile attack.